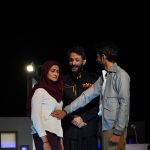 Given all the awards and the controversy around the movie, before it was even released, I wasn’t really sure what to expect when I stepped into the cinema. Was it going to blow me away with it’s cinematic excellence or would it offend me?

Honestly, it did none of those things. But what it delivered was far from impactful. It’s a story that will resonate with many of us as we navigate through life in the wretched streets, bad bosses, vengeful summers and desires that are never realized.

Joyland tells the story of Haider (Ali Junejo), a young man living with his extended family and young wife, Mumtaz (Rasti Farooq) in Lahore. He’s an aloof character, awkward yet warm and caring. He’s a giver. And when he meets Biba (Aleena Khan), he finds a woman who gives back to him – she looks out for him, loves him, and makes him a better dancer.

But of course, the relationship between a transgender woman and a man is not one that will go down well, and so they must sneak little moments where they can. And that’s where the genius of the movie lies. Saim Sadiq creates moments that are funny, relatable and heart-breakingly true. It brings us face to face with our vulnerabilities, but just long enough to see them, not resolve them.

The cast is what carries the film. The actors are par excellence, every single one of them but Sania Saeed and Sarwat Gilani make everything look so effortless. The two deliver such powerful depictions of what it means to be a woman, and Rasti Farooq’s portrayal of a rebellious young wife sets us up for heartbreak. Aleena Khan needs to a regular on our screens. She is truly incredible!

But the movie belongs to Ali Junejo. His performance is nuanced and gripping. There is an uneasiness about his character that’s so relatable. Haider presents a kind, gentle masculinity. It is absolutely endearing the way he holds on to love, and the sensitivity with which he treats both the women in his life.

There is something deeply visceral about the movie. It tells a different story to every viewer. Joyland is about the impossibility of love. And we’ll all been there.

Is it worth the ticket price and time? Yes. This is a movie you will carry with you for a long time.

Karachi Biennale 2022 Comes To An End